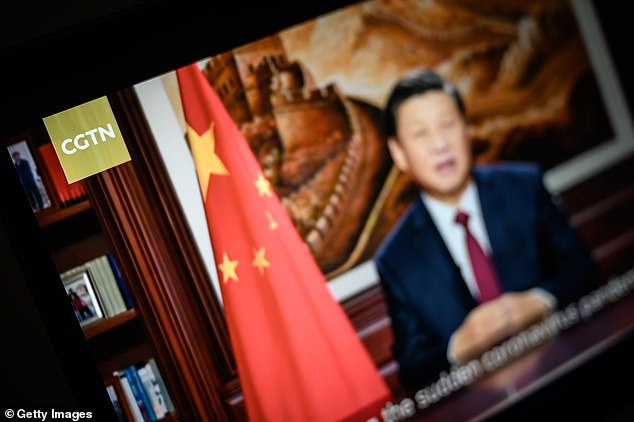 China has threatened to retaliate after British regulators stripped China's state TV channel of its UK broadcasting licence amid mounting tensions between London and Beijing.

The Chinese Ministry of Foreign Affairs accused the UK of 'political oppression' and 'double standards', and demanded Britain 'correct its mistakes' on Friday.

Wang Wenbin, a spokesperson of the foreign ministry, told reporters that Ofcom had acted on 'political grounds based on ideological bias'.

He also accused the 'British side' of ignoring freedom of the press, holding 'double standards' and launching 'political oppression'.

'We urge the UK to immediately stop political manipulation and correct its mistakes. China reserves the right to make the necessary response to safeguard the legitimate rights and interests of Chinese media,' Mr Wang said at a daily briefing.

In its decision issued on Thursday, Ofcom said it revoked the UK licence for China Global Television Network, or CGTN, an international English-language satellite news channel, because of a lack of editorial control and links to China's Communist Party.

CGTN had been available on free and pay TV in the UK. Regulators started looking into the station after receiving a complaint from human rights group Safeguard Defenders that called for an investigation into its ownership.

Ofcom is also continuing to investigate several additional complaints that the station violated rules on fairness and accuracy.

Those complaints include the broadcasting of alleged forced confessions by a former British Consulate employee in Hong Kong and a British corporate investigator and longtime government critic, Gui Minhai, whose whereabouts are now unknown.

In a tweet, Gui's daughter Angela Gui said, 'Finally, five years after first airing a forced confession by my father #GuiMinhai in the UK, Ofcom has revoked CGTN's licence to broadcast. Thank you @SafeguardDefend and everyone else who's filed complaints.'

Finally, five years after first airing a forced confession by my father #GuiMinhai in the UK, Ofcom has revoked CGTN’s license to broadcast. Thank you @SafeguardDefend and everyone else who’s filed complaints. https://t.co/mI8qmTFjiB

Ofcom's decision adds to friction between Britain and China, already strained by the UK's efforts to address allegations of human rights abuses against the Uighur minority in Xinjiang and widen residency rights for Hong Kongers.

Mr Wang gave no details on how China would retaliate. However, the BBC, which is only available in some hotels, businesses and residential compounds for foreigners in China, could become a target.

The Foreign Ministry initially responded to word of the loss of CGTN's licence with renewed criticism of the BBC.

The ministry called a January 29 BBC report on COVID-19 in China 'typical fake news' and demanding a public apology.

It said 'China reserves the right to take further measures.' The BBC said it stood by its reporting and rejected the 'unfounded accusations.'

In his defence of CGTN, Mr Wang said the British knew all along about its ties to China's ruling party.

'China is a socialist country led by the Communist Party. The British side has been well aware of the nature of the Chinese media,' Mr Wang said.

'The British side knew this clearly from the first day CGTN broadcasted in the UK 18 years ago. That the UK now makes an issue of Chinese media's nature and obstructing CGTN in its broadcasting is purely political manipulation,' he said.

CGTN has been at the forefront of the party's bid to seize the narrative from Western news media about human rights in China and its aggressive military and diplomatic moves amid a hardening of attitudes toward China in countries from South Korea to Canada. Source: Daily Mail 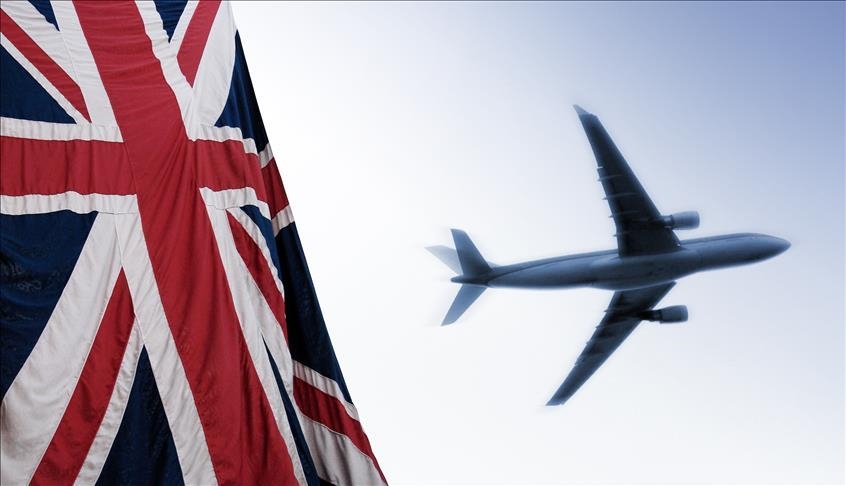 Britain expelled three Chinese spies last year who were in the country posing as journalists, according to a report published by a local media outlet on Thursday.

The article did not name the individuals, but quoted a government source as confirming that they claimed to “work for three different Chinese media agencies.”

The report came as the UK government is set to take up new legislation on spying and the Official Secrets Act in the next parliamentary session due to start in May.

“This would aim to outlaw acts of malign interference and influence by foreign states that do not currently meet the threshold of illegality,” read the article.

Britain’s broadcast watchdog, Ofcom, said on Thursday that the news channel was not under the editorial control of the stated license holder and its operations were in breach of UK laws.

It said a process is also underway to sanction CGTN over its coverage of last year’s protests in Hong Kong.

“In 2020 we found CGTN in breach of the Ofcom Broadcasting Code for failing to preserve due impartiality in its coverage of the Hong Kong protests, and also found a serious breach of our fairness and privacy rules,” the authority said.

“Due to the seriousness of these breaches, we told CGTN that we would consider imposing sanctions.”

The regulator said it has “three other fairness and privacy investigations about content on the CGTN service which also remains ongoing, pending further consideration.” AA 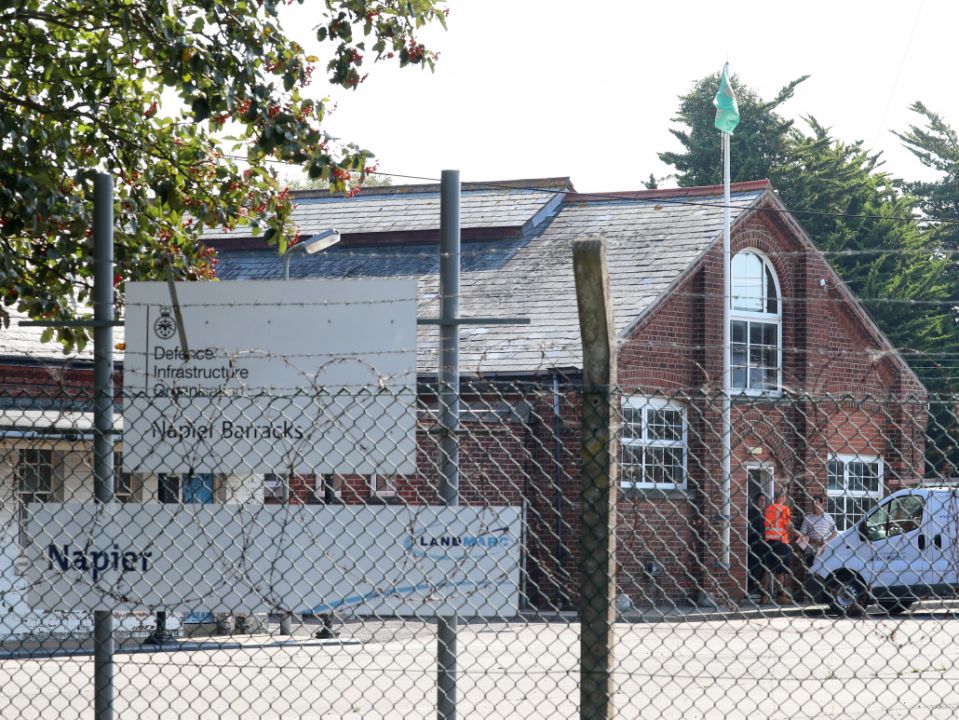 Napier Barracks in Folkestone, Kent (PA) The Home Office placed hundreds of asylum seekers in controversial military barracks following fears that better accommodation would "undermine confidence" in the system, internal documents reveal. Concerns have been mounting about conditions in two Ministry of Defence (MoD) sites – known as Napier Barracks, in Folkestone, Kent, and Penally Barracks, in Pembrokeshire – since they were were repurposed for housing asylum seekers last September. Campaigners, lawyers and humanitarian groups have reported poor access to healthcare and legal advice, as well as concerns over coronavirus safety. The barracks burst into flames on Friday and asylum seekers say they have suffered electricity and hot water outages since the fire, with Kent Police saying five men have been arrested after a disturbance at the camp. It has now emerged that the Home Office, in its equality impact assessment of the plans to use MoD sites to house asylum seekers, justified the move by stating that housing these individuals in more “generous” accommodation would “undermine public confidence in the asylum system”. Critics say the document shows ministers “pandering to prejudice” and jeopardising health for “political ends”. The assessment states that destitute asylum seekers are “not analogous” to British citizens and other permanent residents who are in need of state welfare assistance, and that the “less generous” support provided to this group is “justified by the need to control immigration”. “Any provision of support over and beyond what is necessary to enable the individuals to meet their housing and subsistence needs could undermine public confidence in the asylum system and hamper wider efforts to tackle prejudice and promote understanding within the general community and amongst other migrant groups,” it states. The decision to use military barracks as accommodation for asylum seekers came less than a month after the Home Office apologised for an “operational failure” which meant asylum seekers were placed in a hotel in Ms Patel’s constituency of Witham. The apology came after former Ukip leader Nigel Farage shared a video of himself in front of the hotel claiming “illegal migrants” were living there. Shadow immigration minister Holly Lynch said the claims were “reprehensible” and an “affront to the values of the British people” to lock people into accommodation with no way to self-isolate, and called for residents to be moved into Covid-secure housing “as a matter of urgency”. Sophie Lucas, solicitor at Duncan Lewis, a law firm that has represented a number of asylum seekers who have subsequently been moved out of the barracks, said the document insinuated that a less generous system for asylum seekers was a “legitimate response” to outcry from extremist groups. “Instead of attempting to combat bigotry and hostility towards asylum seekers, the Home Office have pandered to prejudice. Penalising an already extremely vulnerable group of people in this way is unlawful,” she said. Chai Patel, legal director at the Joint Council for the Welfare of Immigrants (JCWI), said: “The government implied these cramped and disused barracks were being used as temporary housing because there was no alternative. “But this document reveals that Home Office has been jeopardising people’s health for partly political ends – prioritising playing ‘tough’ on migration over the lives of extremely vulnerable people, who’ve been placed in conditions reminiscent of those they were fleeing.” The equality impact assessment seen by The Independent, which was carried out in September, also stated that social distancing was possible in the barracks, citing that “beds in dormitory style sleeping quarters [would] be at least two metres apart” and that “regular cleaning will take place to reduce Covid risks”. It said residents would receive “equivalent assistance” to that which they would have if placed in alternative initial accommodation or a hotel. A Covid outbreak at Napier Barracks – which has not been used by military personnel for more than five years – eventually spread to more than 100 people after asylum seekers were banned from leaving the site and threatened with arrest if they did. Naomi Phillips, director of policy and advocacy at British Red Cross, said the sites were “completely inappropriate and inhumane” as housing for refugees, and called for them to be close “urgently”. "Tragically, for the individuals who have been made to live in these sites, the fears that we and others had have been borne out. The people we’ve spoken to have told us that they didn’t receive health screenings, were given little or no information about what was happening to them, and simply do not feel safe in the barracks,” she added. Bridget Chapman, of local charity Kent Refugee Action Network, said the Home Office’s decision to use “inappropriate and isolated” buildings as asylum seeker accommodation was a “deliberate choice to create a narrative of being deliberately tough on those seeking sanctuary”. Dr Claire van Nispen tot Pannerden, an infectious disease consultant at Doctors of the World, said the assessment failed to address the reality of the ongoing pandemic, describing it as “beyond negligent” to accommodate people who are not from a household in large shared accommodation with shared facilities. Mr Philp said he rejected allegations that asylum seekers had not been able to access healthcare or legal advice, claiming they could access healthcare “whenever needed” and were “freely able” to contact legal representatives or support. “These sites have accommodated soldiers and army personnel in the past – it is wrong to say that it is not good enough for asylum claimants,” he added. By May Bulman/The Independent/Yahoo